Because of its musical versatility, it has helped produce some of the most beautiful acoustic guitar songs ever composed. And if you’re curious about which best songs made it to our list, continue reading to find out.

You’d be surprised that one of the most beautiful songs to play on acoustic guitar comes from the biggest rock legends to have ever walked the earth. We’re talking about Wild Horses by The Rolling Stones.

Wild Horses was initially released in the band’s Sticky Fingers album in 1971. It was written by the band’s lead singer, Mick Jagger, and guitarist, Keith Richards.

Looking into the lyrics, we can see that it’s a piece about the beauty and sadness of growing up, a time when we realize that being an adult isn’t always smooth sailing. With Jagger’s voice breathing life into the song, and Richards doing his magic with the acoustic guitar, you can feel all the emotions they have poured into the song.

The next song is believed to be Bob Marley’s anthem of anthems – the Redemption Song.

This 1980 song is written by the King of Reggae himself for his twelfth album, Uprising. He started writing it in 1979 when he had been diagnosed with cancer and began to have a deeper understanding of his mortality.

Looking into the lyrics, we see that it’s about breaking free from the shackles of mental slavery. Bob Marley understands that there is a need to free our minds to truly live our lives. And he has written that message so perfectly in this song.

While it has an acoustic tone, you can still hear Bob Marley’s reggae influences which makes it even more appealing. That’s why we believe that it is one of the most beautiful sounding acoustic guitar songs.

When it comes to the beautiful acoustic guitar fingerstyle songs, Babe I’m Gonna Leave You by Led Zeppelin is high on that list.

The song is originally written by Anne Bredon in 1960 and had been quite popular for decades. This led to numerous renditions, including one by the English rock band, Led Zeppelin. The band’s rendition was released in 1969 as part of its Led Zeppelin album.

Being one of today’s recognized guitar greats, it’s easy to see why Jimmy Page’s rendition became a big hit. The lyrics allow you to feel the heartache of leaving someone you love because of your career, while the beautiful fingerstyle playing seems to emphasize all these emotions. And that’s why it remains to be one of the most beautiful acoustic songs to date.

Tears in Heaven by Eric Clapton is probably one of the saddest yet sweetest acoustic songs you will ever hear.

The song is about the loss of a loved one, inspired by the death of Clapton’s 4-year-old son who met his tragic demise after an accident in New York. The accident happened in 1991, but Clapton wasn’t ready to open up about it until a few months later. And in 1992, Tears in Heaven was released.

Aside from Clapton’s clear vocals, his acoustic guitar playing perfectly echoed what he was trying to convey. You can feel the love a father has for his son, as well as the pain he felt because of his loss.

5. The Sound of Silence – Simon & Garfunkel

Another hauntingly beautiful acoustic guitar song is The Sound of Silence by Simon & Garfunkel.

Originally entitled The Sounds of Silence, this song is written by Paul Simon for their Wednesday Morning, 3 A.M. album, which was released in 1965.

The song is about the failure of human beings to express their true emotions. While we can communicate, there are times that we cannot truly express what we want to say – and the song has echoed that message through its verses.

Consisting of chords such as A-minor, G, F, and C, it’s believed to be one of the most beautiful acoustic guitar songs for beginners. It’s also the subject of various renditions, which reflects the staying power of such a classic hit.

We can agree that good acoustic guitar songs do not have to have lyrics on them. The rhythmic guitar-strumming is enough to keep us enthralled and lost in its harmony. And that’s exactly the case for Classical Gas by Mason Williams.

This instrumental piece is composed and recorded by famed guitarist, Mason Williams, in 1968. By 1969, it won three Grammy Awards, which is a testament to how well-written it is.

Also, the song has been the subject of multiple cover versions, which also reflects its versatility well into contemporary times.

Falling Slowly by Glen Hansard and Marketa Irglova is one of the most beautiful contemporary acoustic guitar songs.

Originally released in 2006, this indie single is part of the romance film, Once. With that said, it is often regarded as a love song between two people who had once fallen apart and are looking to rekindle their romance.

However, the writers have clarified that it comes from a perspective of hope – that our dreams may be distant, but it is achievable if we don’t give up. Perhaps that’s one of the reasons why Kris Allen went on to sing the song on American Idol. And as we all know, he pushed through the season and won it eventually.

Another classic and pretty acoustic song is Dust in the Wind by yet another rock band, Kansas.

The song is written by the band’s Kerry Livgren for its Point of Know Return album and was initially released in 1978. The song is about how all of us return to dust eventually – allowing listeners to reflect on man’s mortality. And it can help you re-assess how you live your life.

Surprisingly, the song finds inspiration from the Bible. Specifically, the verse from Ecclesiastes 3:20, which reminds us that we all return to dust. It also finds roots in The Tale of the Heike, a Japanese epic, and in Native American Poetry. All of these references remind us that we are not immortal, and Dust in the Wind sends that message.

Another instrumental piece that finds its way into this list is Rainy Window by Masaaki Kishibe.

With its relaxing harmony and slow-paced tempo, this musical piece delivers an easy-listening sound for when we simply want to unwind. It’s not too upbeat to cause any anxiety, and the soft guitar fingerstyle creates textures that are soothing and easy on the ears.

Guaranteed by Eddie Vedder is another contemporary acoustic song that made it into this list.

This beautiful piece was written and performed by Eddie Vedder, also known as the vocalist behind the rock band Pearl Jam. It is part of the soundtrack for the movie, Into the Wild in 2007.

The lyrics to this song are deep, which reflects the poetic genius of Vedder himself. And once we factor in the acoustics he played, it tells us the story of our struggles with how we live our lives. particularly, with how we always seem to live day-to-day routines that are seemingly meaningless. It’s a nod to living a simple life, although it can be hard for all of us to do so.

There’s no denying that acoustic guitars are among the most musically versatile instruments in the market. While this instrument is not the easiest to learn, you will be able to create intricately beautiful songs once you get the hang of it.

If there’s anything the list above has proved, it’s that great acoustic songs are here to stand the test of time. A song that’s beautifully written – accompanied by a soothing guitar number – will surely be remembered as a classic for decades to come. 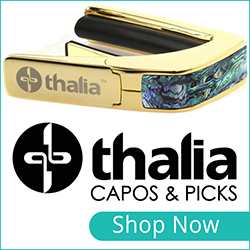